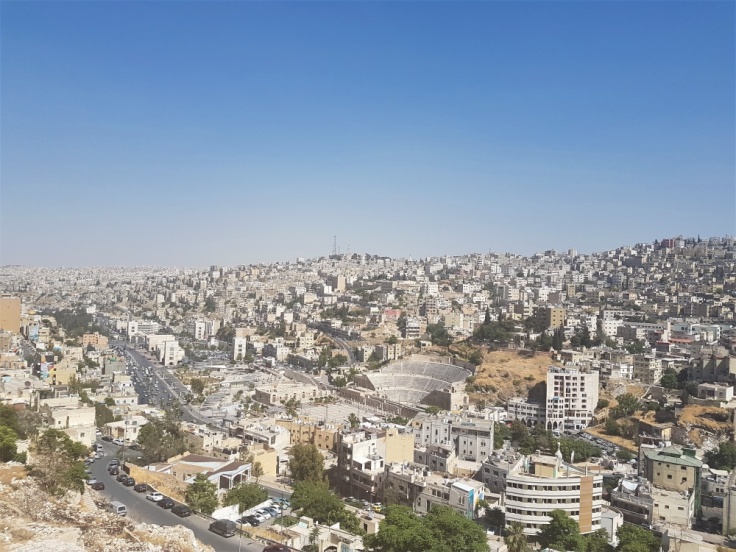 A bustling, vibrant capital city that’s home to more than one million people, Amman is a modern metropolis with ancient roots, having been inhabited in some form or another for millennia. Its former incarnations include Ammon, the capital of the Ammonite people during Biblical times, and the Greek and Roman city of Philadelphia. And it’s where I spent my final day in Jordan.

My first destination was the Jordan Museum (above), a small museum dedicated to the country’s history and culture.

Its exhibits cover much of the region’s early history, from its early settlement by prehistoric hominids to the introduction of farming, as well as the innovations of the Bronze and Iron Ages, and the influence of the Nabateans, the Greeks, the Romans and the Byzantines. It also explores many aspects of Bedouin culture, focusing on topics as varied as cooking practices, the tribal court and weaving.

One of my favourite exhibits looked at the development of writing and featured an incredible display that showed how the world’s alphabets evolved. It was superb, and as part of the exhibit, you could type your name into a computer to find out what it would be in Aramaic, Nabatean, Greek and Arabic, then print off a certificate to take home with you.

I also was intrigued by the Ain Ghazal statues, a series of unusual, 8,500-year-old plaster figurines that are completely out of proportion – one had a tiny head with a fat body and legs, another consisted of a large square with two small heads.

But the undoubted highlight is the fragments of the Dead Sea Scrolls that are on display alongside a few copper-plated scrolls.

The scrolls, which contain some of the oldest known Biblical texts, were discovered in caves in what was then Jordan during the 1940s and 1950s. Most of the scrolls now belong to Israel with only a few remaining in Jordanian hands, so it was incredible to have the chance to see these world-famous texts up close, even if they only amounted to a few fragments.

I really enjoyed the Jordan Museum. It was well-curated, boasted interesting artefacts and the wealth of information for visitors helped provide context to some of the many sites I’d been to in the country. We only spent an hour there, but I could easily have spent longer, reading all the information plaques in detail and studying the many objects on display.

After the museum, we made our way to the Roman Theatre (above), a two thousand-year-old sandstone amphitheatre in the heart of the city. With its three tiers and seating for around 6,000 people, the amphitheatre is bigger than the two amphitheatres we visited in the nearby Roman city of Jerash.

We spent a little while walking around the theatre, climbing its steps and sitting in its seats, before taking a look at another, much smaller amphitheatre (below) near its entrance. The amphitheatres were very well preserved and it was amazing to see they were still in such good condition after so many years. 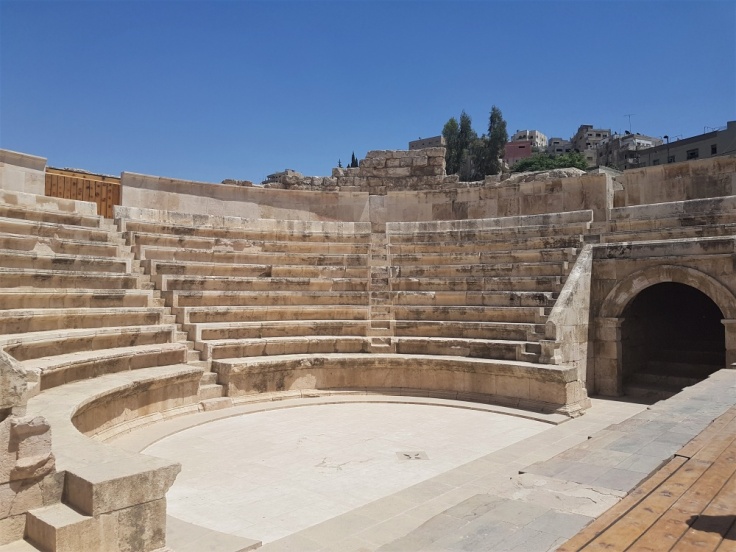 The area surrounding the amphitheatre is home to a couple of small, basic museums.

To the left of the Roman Theatre is the Jordan Museum of Popular Traditions, which features clothing and jewellery from Jordan, Palestine and Syria. It also exhibits folklore decorations and daggers, as well as stones worn or carried by the Bedouin for preventative medicine or curing purposes. Despite being very small, it’s a great little place and there are a number of interesting artefacts on display.

The Folklore Museum, meanwhile, lies to the right of the Roman Theatre and uses models to showcase traditional Jordanian ways of life, such as what women did in the home and how the Jordanians made bread. It’s not as interesting as the Museum of Popular Traditions, but it’s worth a quick peek inside.

From the Roman Theatre, we made our way to the ruined citadel, which lies atop the Jebel el-Qalaa mountain opposite. The citadel is an enormous ruined archaeological site in the centre of Amman and provides spectacular views of the city (below).

In front of us were the tightly-packed apartment complexes where many of the Palestinians who’ve sought refuge in Jordan live, while in the distance I could make out the tall skyscrapers of the modern city, as well as the orange roofs of the royal palace, nestled among lush green gardens.

The citadel ruins are extensive and take a good hour to walk around. Representing a swathe of Amman’s ancient past, the remains date back to various eras including the Roman period, the Umayyad Caliphate and the Byzantine empire. Some of the most impressive ruins include the tall and imposing Roman Temple of Hercules (above), along with the small blue-domed mosque that lies within the ruins of the old Umayyad Palace (below). 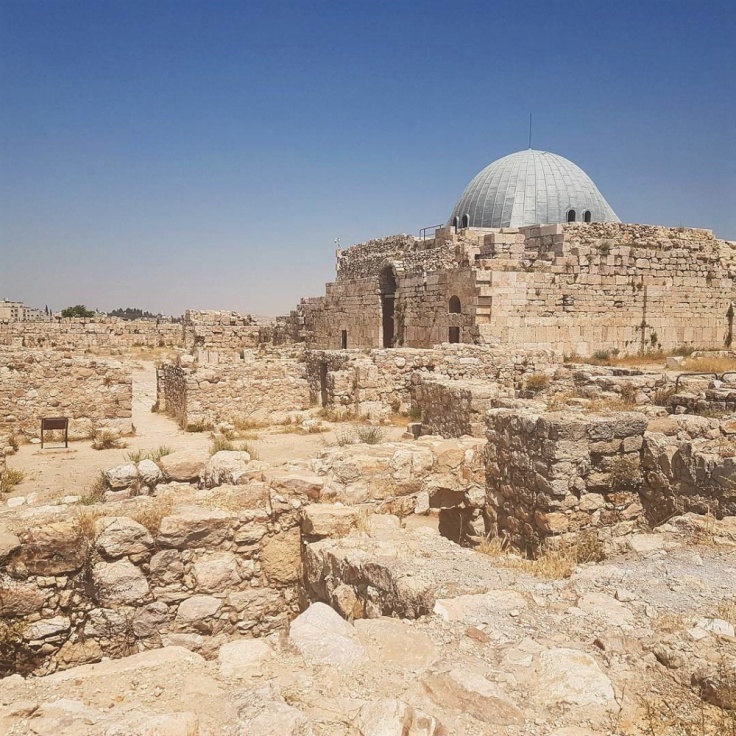 The citadel complex is also home to the Jordan Archaeological Museum (below). The museum houses Jordanian artefacts that date from the Bronze, Roman, Hellenistic, Chalcolithic, Iron, Nabatean and Umayyad periods.

Fossils, coins, bits of pottery, jewellery and glassware are among the artefacts on display, along with horse, buffalo and rhino teeth, and three anthropoid coffins. The museum was small and fairly basic, but it offered a fascinating glimpse into the country’s history (not to mention, it provided a welcome break from the scorching sun outside).

I enjoyed my informative, whistle stop tour of the Jordanian capital and I came away with a much deeper understanding of the country’s – and its capital’s – long history. It was a great way to end a delightful week in a part of the world I hadn’t been to before.