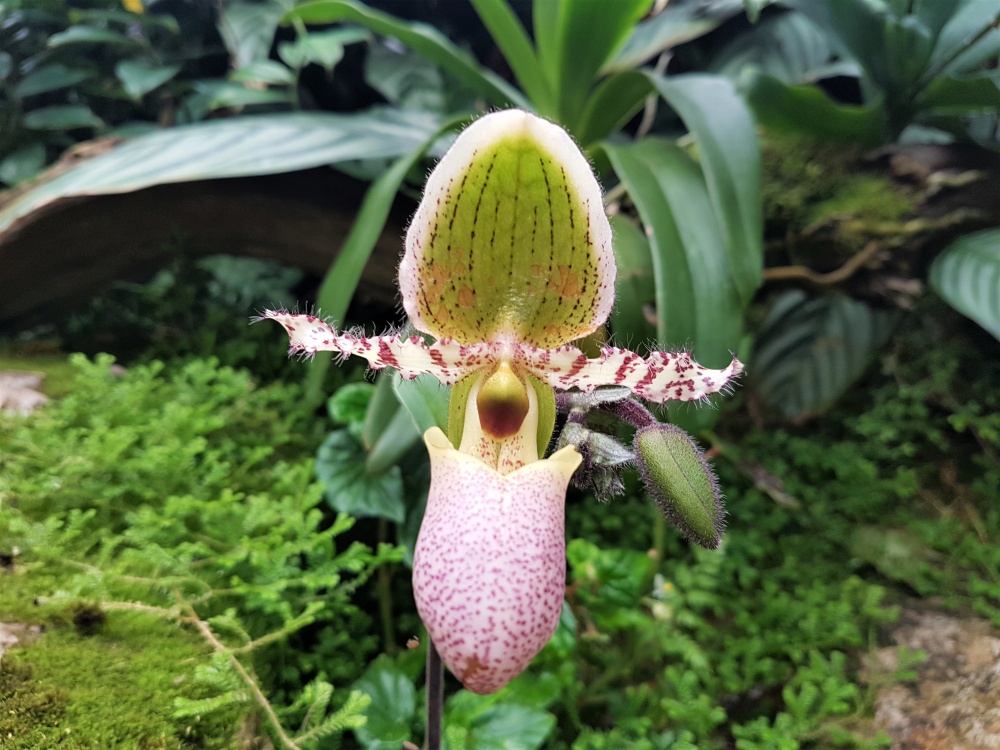 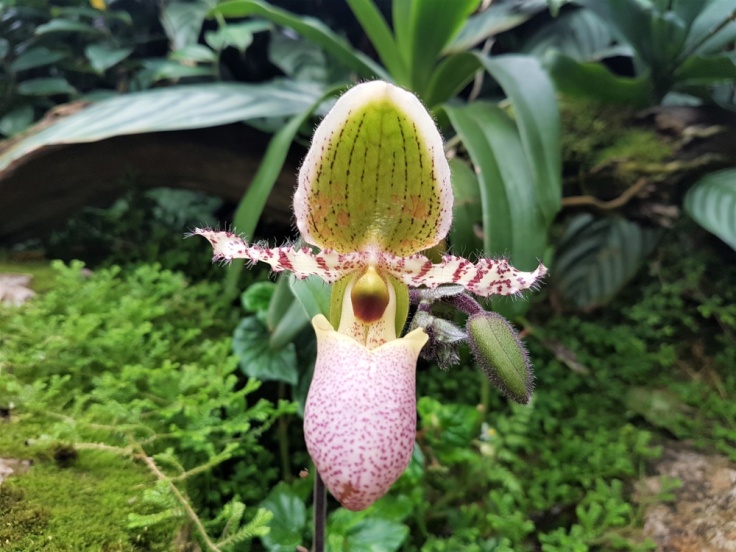 I was in London in the spring catching up with friends, when one of my friends suggested we spend the day at the Royal Botanic Gardens in Kew. I love Kew Gardens and hadn’t been there for years, so I was more than happy to revisit one of my favourite London haunts.

Home to more than 50,000 species of plants from all corners of the globe, the world-famous gardens date back to the mid-18th century, when King George III’s mother, Princess Augusta, established a botanical garden at Kew. In 1840, the gardens were handed over to the state and they’ve been open to the public ever since. 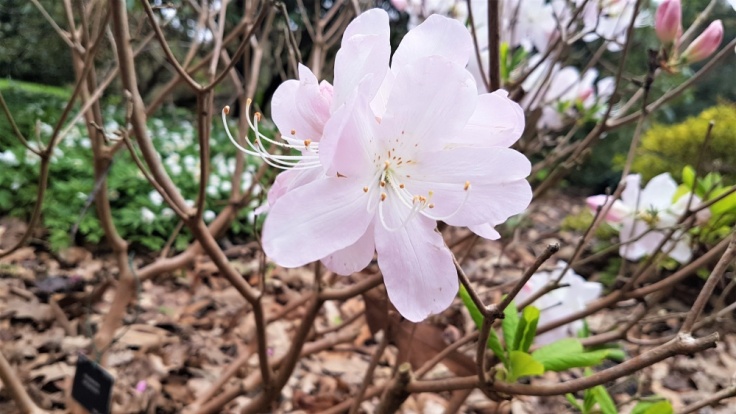 Kew holds a special place in my heart because I vividly remember visiting a park in London that had an amazing pagoda as a child. For years, I wasn’t sure if it was real or if I’d imagined it, and it was only when I visited Kew as an adult that I was able to put two-and-two together and realised it was home to that pagoda. 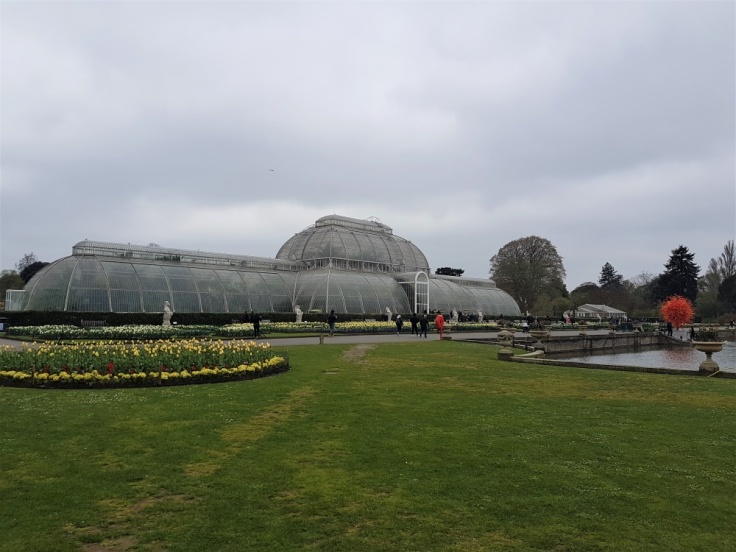 We began our visit to Kew with a trip to the Palm House (above), a large, elegant, slightly rundown Victorian greenhouse that’s home to plants from tropical hot spots all over the world. It was fascinating being able to compare the similarities and differences of the various plants, and I got quite excited when I realised I recognised a few of them having seen them in the wild (such as the cacao tree from Costa Rica). 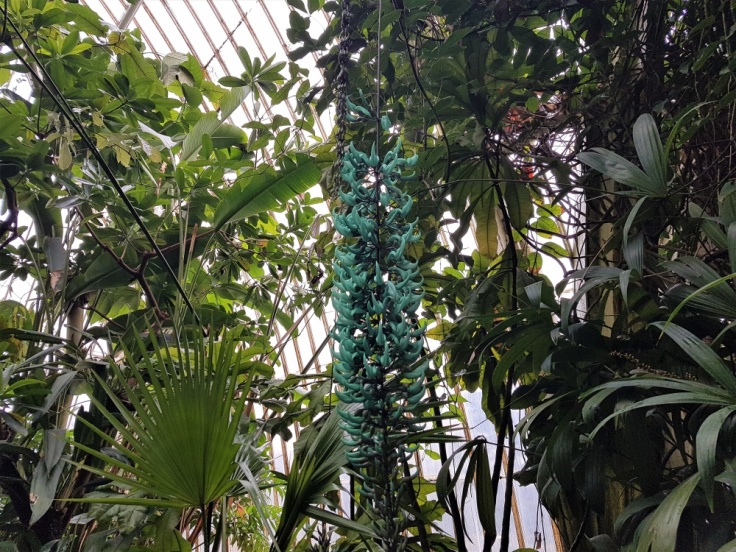 I enjoyed learning about some of the bizarre plants that call the Palm House home, such as the tree with its roots growing above ground. One of my favourite plants was the jade vine (above), an eye-catching jade green plant that stood out from the many palms surrounding it.

There were lots of helpful information signs about the plants in the Palm House, from which we learned some unexpected facts. For example, we were surprised to learn that the Palm House is home to the world’s oldest pot plant – a South African palm that dates back to 1775!

After walking all the way around the Palm House, on both the ground floor and the upper balcony that spans the edge of the greenhouse, we headed back outside and strolled through the gardens until we reached The Hive (below).

The Hive is a 17m-high aluminium structure that’s designed to recreate life in a beehive and is a wonderful piece of engineering. It was somewhat eerie standing in the middle of it, and it made me realise how lucky I am not to be a bee, having to endure something similar on a regular basis. 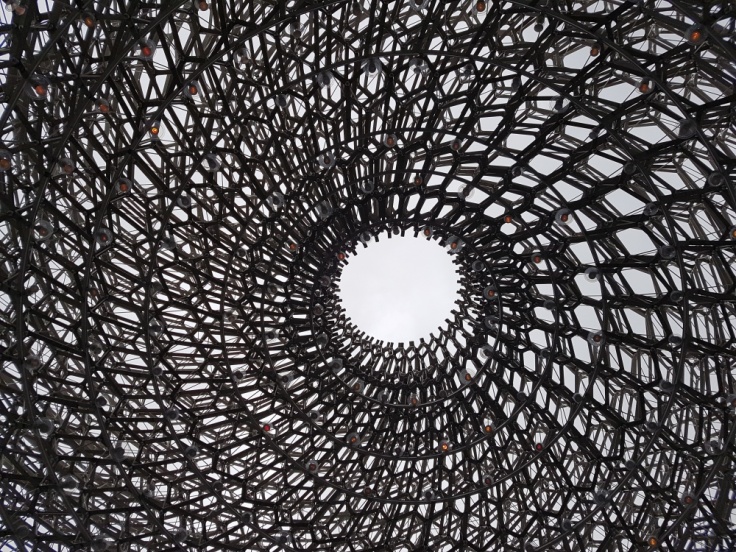 From The Hive, we walked to the Princess of Wales Conservatory. This large indoor greenhouse is home to a variety of rockeries, and houses plants that would normally be found in dry tropical environments, including deserts. It’s full of orchids, succulents and cacti, as well as other less well-known plants, and we had a great time learning about the unusual flora and pointing out curious specimens to each other.

After the delights of the conservatory, we continued our way through the gardens until we reached Kew Palace (below). Although it’s situated in the grounds of Kew Gardens, the palace is run by a different organisation, Historic Royal Palaces.

The small, red brick palace was built in the 17th century by Samuel Fortrey, a silk merchant, and fell into royal hands during the reign of George II. But it’s his grandson George III and George III’s wife Charlotte of Mecklenberg-Strelitz who are most closely associated with the palace. It was here that George III recuperated when he was laid low by his mental illness. 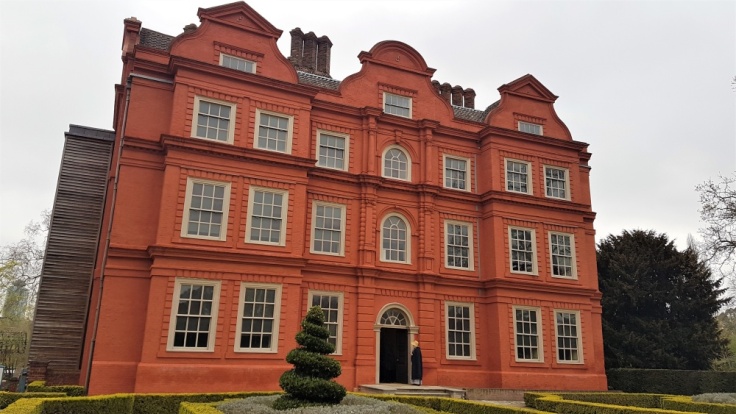 Inside, the palace is decorated and furnished in the Georgian style, as it may have looked during George III and Queen Charlotte’s day. Thanks to its small rooms, it has quite a homely feel and is more like a posh manor house than a grand, splendid palace. It’s quite easy to picture a family living here once upon a time.

Given its small size, it didn’t take long to walk around the palace, and afterwards, we popped inside the nearby Royal Kitchens. The 18th century kitchens were, unsurprisingly, where the servants used to prepare food for the royal family.

The downstairs rooms where the food was made were large and bare (there’s not much to them, so they’re rather dull and uninteresting), while the upstairs rooms housed the kitchen offices. These were a little more interesting as there was more to them – for example, you could see the books where they logged the food they bought. 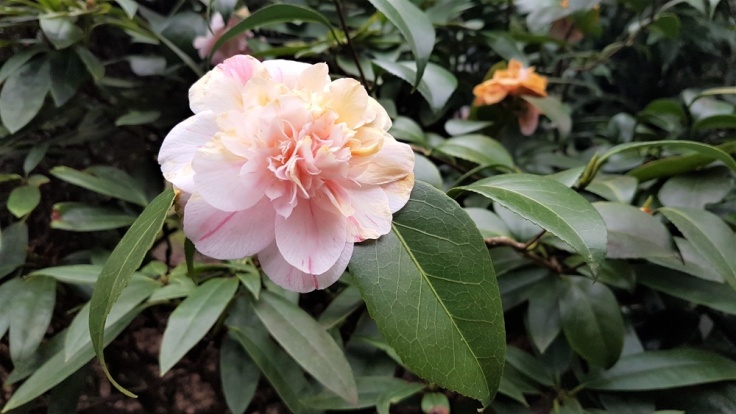 From the palace, we set about exploring the rest of the gardens and made our way through the grounds to the Rhododendron Dell. I always associate rhododendrons with Agatha Christie novels (they always seem to crop up in them), and thanks to my mother’s persistent teaching, they’re one of the few plants I can identify. As it was spring time, many of the rhododendron were in bloom and we enjoyed a lovely stroll amid the pretty flowering plants. 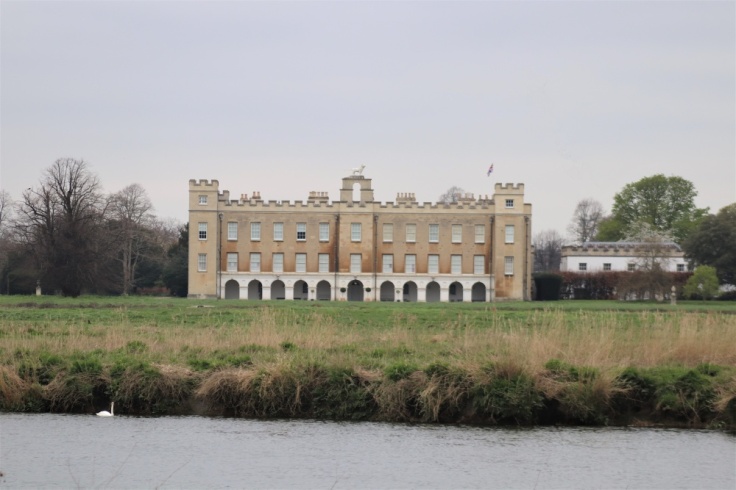 At the other end of the Dell, we stopped briefly at a gap in the trees to take a look at Syon Park (above, the magnificent London residence of the Duke of Northumberland) on the other side of the River Thames, before carrying on through the tree-lined trails until we reached the Great Pagoda (below). 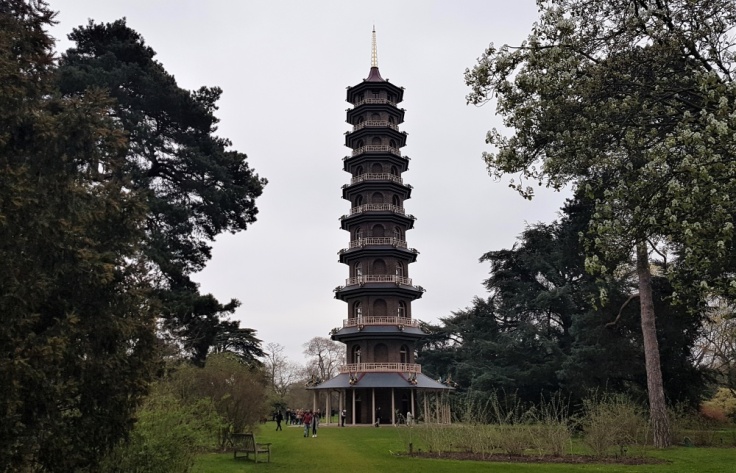 The impressive structure was built in 1762 as a present for Princess Augusta. Having not been to Kew for a few years, I hadn’t realised you could now go inside the pagoda, and we briefly considered doing so, until we saw how long the queue was. As I didn’t have long left until my train back to Cardiff and there was more we wanted to see, we decided to skip it – but it’s at the top of the list for my next visit! 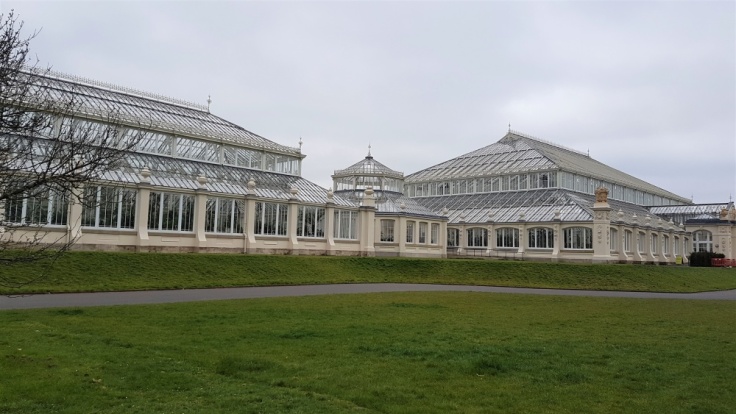 Our next stop was Temperate House (above), a delightful glass behemoth that recently reopened after five years’ restoration work. Dating back to 1863, it’s the biggest Victorian greenhouse on earth and boasts some 10,000 plants from temperate zones all over the world, including Mauritius, the Himalayas and New Zealand.

It’s a fantastic structure and we took our time looking around the greenhouse, marvelling at the huge variety of flora on show and learning about the many plants that live in temperate zones.

From Temperate House, we ambled through the Cherry Walk – a small, pretty spot that was lined with blossoming cherry trees – before finding ourselves back at the entrance. I really enjoyed our day out in Kew Gardens. It’s a beautiful, relaxing park, and with so much to see and do, there’s something for everyone. It’s a delightful place that never disappoints and it’s well worth visiting if you’re in London.