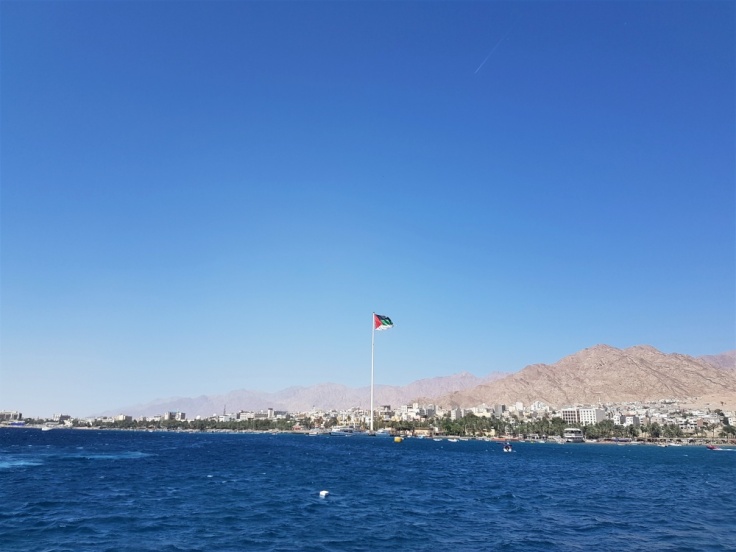 The port of Aqaba lies on the southern tip of Jordan and is the country’s main gateway to the sea as it’s the only large town on Jordan’s small strip of coast. As such, it’s a popular destination for Jordanians hoping for some sea with their sun and sand.

Aqaba was much more touristy than the other parts of Jordan I’d visited, and with palm trees lining the roads, the rich blue expanse of sea, packed beaches and countless families milling about, it had a holiday vibe to it.

After checking in to our hotel, we made our way to the port area, where we hopped on a boat for a tour of the Red Sea. There were a number of gigantic shipping vessels, filled to the brim with containers, around the port and lots of industrial equipment lining the shore. Across the water, we could clearly see the Israeli town of Eilat, only a few kilometres away.

Our glass-bottomed boat was a simple two-deck affair, and once on board, I made my way down to the bottom deck, so I could look through the clear bottom. We set sail across the Red Sea – ironically the bluest sea I’ve ever laid eyes upon – and there was little to see aside from the odd enormous shipping vessel, the occasional holiday resort on the Jordanian shore, and the barren, sandy mountains of Jordan and Israel. 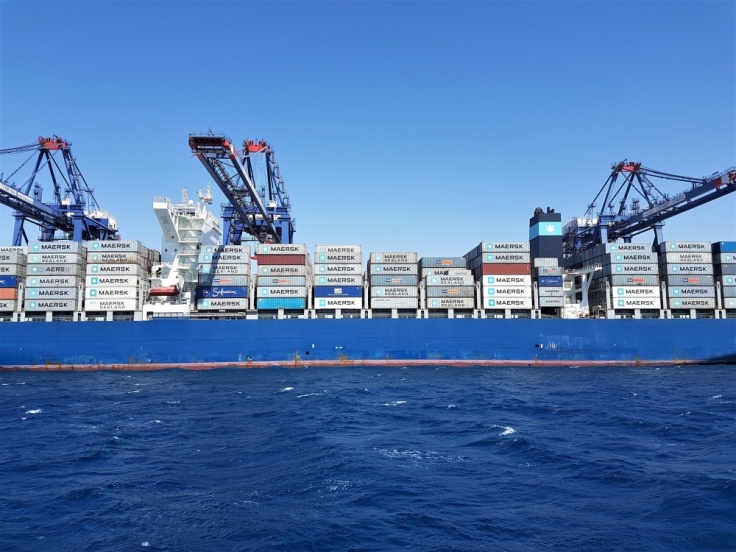 After around half an hour, the boat sailed closer to the shore, near a few resorts on the Jordanian coast, and slowed down so we could see the coral reef below. It was a beautiful sight and I got quite excited when we saw a few fish swimming among the coral.

The boat continued on its merry way through the choppy, vivid blue sea, passing over a sunken battleship, now studded with coral and what seemed to be a sea creature’s paradise. We soon came to a stop at a place called Black Rock, where we were offered the chance to go snorkelling.

I quickly changed into my swimsuit, put on my snorkelling gear, jumped off the back of the boat and swam out to our guides, who almost immediately pointed out a large turtle swimming beneath us, close to the sea floor. It was an incredible sight – seeing a sea turtle was top of my wish list and I was chuffed to bits we’d seen one straight away – and I spent ages watching the magnificent creature as it slowly glided through the water.

I got so caught up watching the turtle, I hadn’t realised the rest of the group had moved on, so I swam towards them to make sure I didn’t lose them, struggling at times to clear my breathing apparatus as the sea was quite rough.

When I reached the group, I took another look under the water and realised I was now swimming close to the coral reef with its spectacular cloud- and sponge-like shapes. There were lots of fish swimming in and around the coral, including a stingray, as well as a few small jellyfish, which I made sure to keep well clear of. I also made sure to keep a good distance from the reef to avoid touching and damaging the delicate coral.

After a while, one of our guides signalled it was time to go back to the boat. I was having such an amazing time, my heart sank – I didn’t want to leave and could happily have stayed there all day. Back on board, I headed up to the top deck, where lunch was being served. Once everyone had finished eating, the boat picked up speed and we headed back to Aqaba.

That evening, we had dinner in a restaurant down by the harbour, and afterwards went for a stroll along the beach, around the area where an enormous flag of the Arab Revolution stands tall. The area was packed with Jordanians down for the weekend, chatting and dancing along the seafront.

I enjoyed my brief stay in Aqaba. There didn’t seem to be a huge amount to the town – it’s very much a holiday resort/industrial port – but I loved our tour of the Red Sea, especially snorkelling near the coral reef. The reef was breathtaking and I loved every minute snorkelling around it, in awe of its incredible marine life. It was one of my favourite experiences in Jordan, and was a nice way to spend my penultimate day in the country, before heading back up north to the capital Amman.