Built by King Manuel I of Portugal in the 16th century, the magnificent Mosteiro dos Jerónimos is one of Lisbon’s most popular landmarks. The huge monastery, which is affiliated with the Order of St Jerome (hence its name), is situated in the western suburb of Belém and is the resting place of Portuguese monarchs and poets, as well as the legendary explorer Vasco da Gama.

Having read that the monastery is often heaving with tourists, I arrived bright and early before it opened at 10am and was glad I did as the queue to go inside was already enormous. I queued up in the sunshine for what seemed like ages, taking the opportunity to admire the ornate carvings on the monastery’s exterior and watching tour group after tour group bypass the long line, before I eventually got to the front of the queue and bought my ticket.

Inside, I headed straight for the monastery’s cloisters. The 16th century cloisters, which are a classic example of Manueline architecture, are split over two floors. I wandered out onto the grassy quadrangle in the centre of the cloisters for a better look and was taken aback by the abundance of intricate, ornate details carved into the stone. 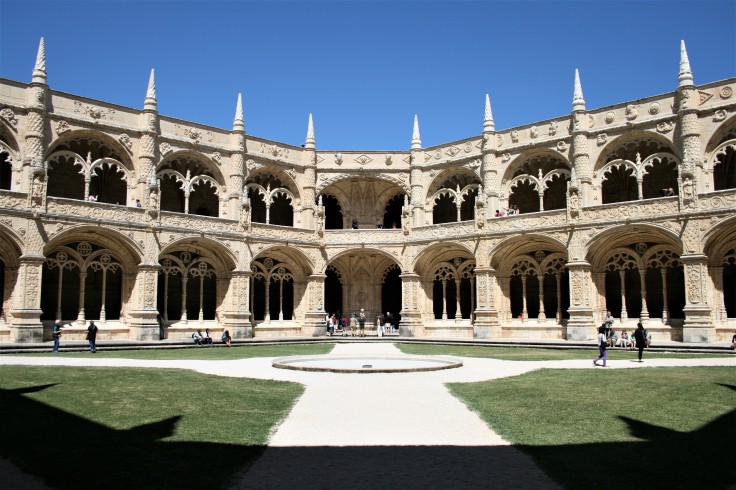 The cloisters are one of the most superb pieces of craftsmanship I’ve seen. They’re also really photogenic and I found myself taking a ridiculous amount of photos, waiting patiently for the many visitors around me to move so I could snap as many tourist-free shots as possible. 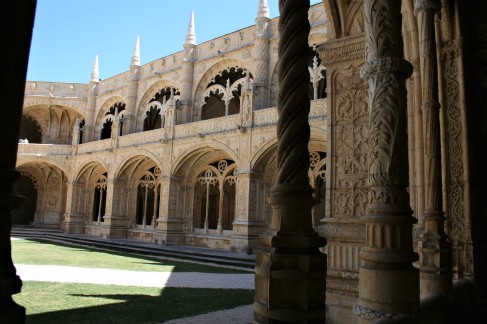 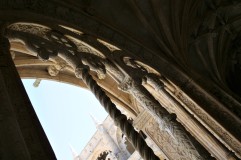 Having walked all the way around the ground floor, I moved upstairs where I took a look inside the Church of Santa Maria from the balcony that overlooks it. The church is home to the tombs of King Sebastian and Vasco da Gama, along with various other Portuguese royals. You can enter the church from the ground floor, but the queue to go in was enormous and having already spent ages queuing, I decided to skip it and enjoy the view from the balcony instead.

The balcony offers a great vantage point from which to view the church (above) and I got a good look at its architecture, including the 30m-wide vaulted ceiling and could just make out the high altar at the far end, too. It’s a beautiful church but seeing how many people and tour groups were milling around down below, I was glad I was viewing it from the relative quiet of the balcony. 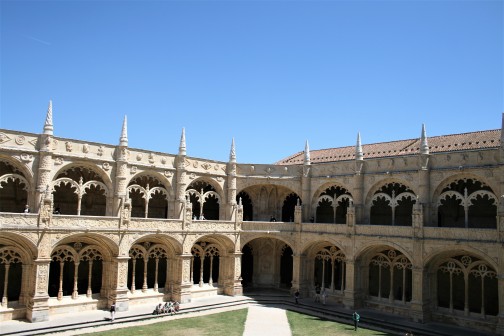 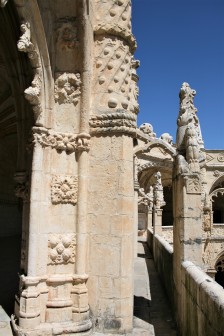 I then spent some time exploring the upper floor of the cloisters. Like the ground floor, the upper level is filled with ornate carvings and there are lots of interesting features to photograph, so I had a good look around, taking even more photos as I went.

After seeing all there was to see, I went back downstairs where I wandered around the different rooms that lead off from the cloisters, such as the sacristy, the library and the refectory. The refectory (above, left) is a long, empty rectangular room with pretty blue, yellow and white tiles decorating the walls that depict scenes from the Bible such as the feeding of the five thousand and Joseph’s life in Egypt. The library, meanwhile, is home to an interesting exhibition about the history of the monastery, Belém and Portugal called A Place in Time.

The monastery is fantastic and if it wasn’t clear by now, I really enjoyed my visit. As a keen photographer, I left with a crazy amount of photos. The only downside was the huge number of visitors. I’m not sure there’s ever a quiet time to go, but I’d imagine early morning or late afternoon are probably the quietest times if you’re planning a trip.